The next in our series of #chefsinrealkitchens is inspired by Jason Atherton; holed up, we believe, somewhere near Wandsworth Common. Like the rest of us, his kitchen is in isolation (just him and his family). His IG handles and hashtags, should you wish to pay a ‘virtual’ call, are @_jasonatherton #socialkitchenisolation. 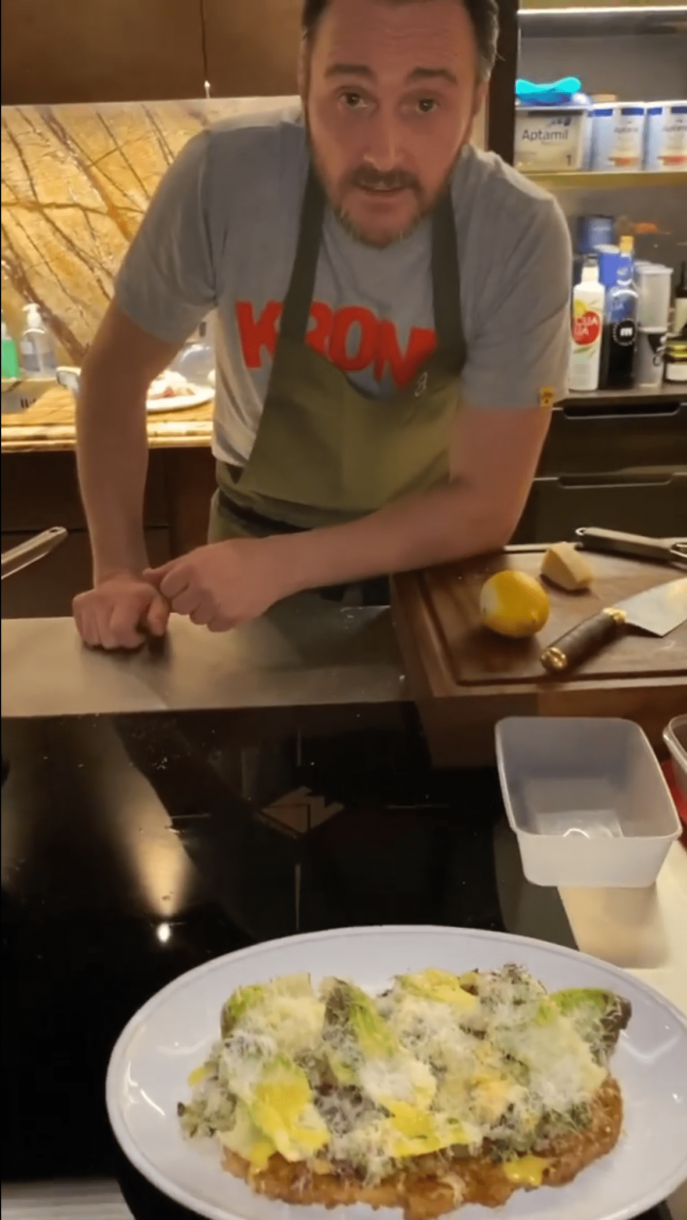 Our MD Tony, has been watching with a certain dedication, and made the call on Friday that, not only would he join Jason’s first ‘cook-a-long-IG-live’ (7pm, Pork Milanese, with crushed potatoes, capers, cornichons, and home-made mayonnaise on the menu) but that he was also going to livestream his following Jason, to us following him (while some of us were also following Jason …) – and at about this point I should probably start using words like ‘meta’, but I don’t want this to get too heavy – and anyway, I was already a bit confused (and a bit excited) to find out exactly how all this was going to work.

As Tony got himself ‘screen ready’, Hayley (our Creative Director and Tony’s Wife) prepped for her designated, if un-practiced, role as cinematographer for this IG live. Perhaps influenced by the current (albeit also currently ‘closed’) Warhol exhibit at the Tate, she took a ‘counter-cultural’ approach to Tony’s ‘15 minutes’, opting for a slightly ‘abstract’ feel in setting the camera angle to ‘landscape’ where IG normally enforces a strict ‘portrait’ regime (and for those who haven’t tried, don’t mock – the charm of the IG live is that nobody out there knows what they are doing with the ‘technicals’ – designed to be WYSIWYG we are getting exactly that).

Anyway, those following along had, duly, to decide whether to turn the screen to see Tony standing upright, or to leave it be if they wanted to read (and/or type) comments in a ‘looking glass’ world where ‘chef Tony’, in his bold red apron, cooked in a kitchen apparently unmoored from the normal rules of gravity (and, even more impressive, drank the occasional slurp of red wine at this angle without spilling a drop!). 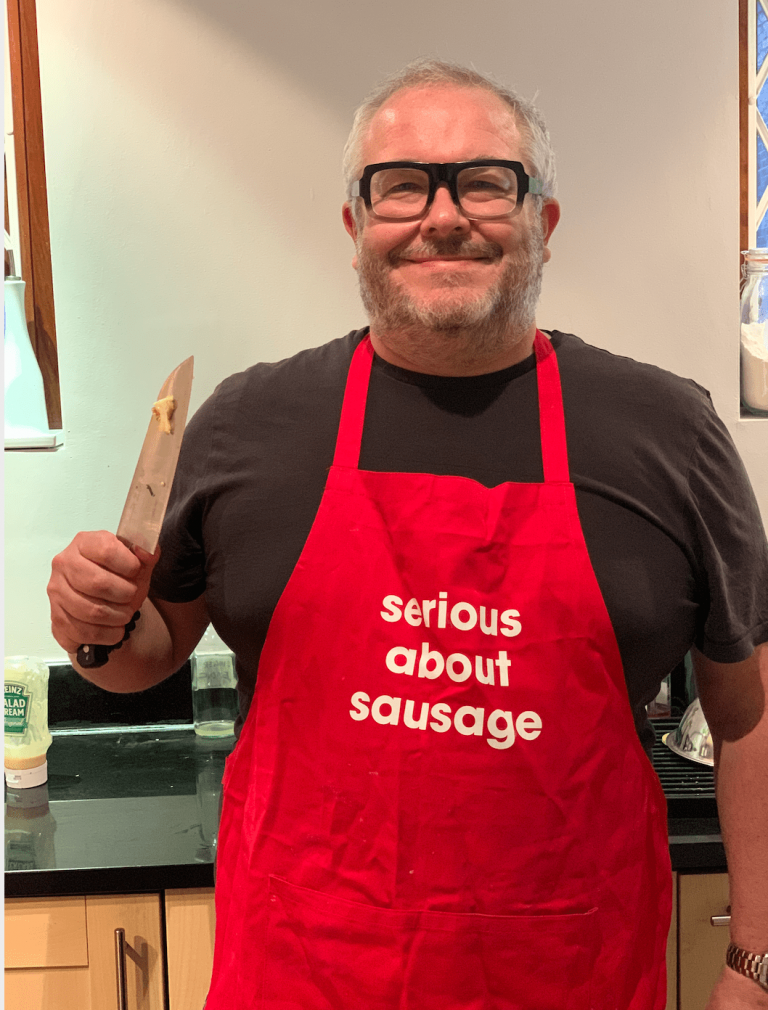 This extra layer of IG Live undoubtedly added an element of jeopardy to the mix well beyond Jason’s control. Tony was both hosting and guesting at the same time and, as a consequence, sometimes lost the thread of where he was with the instructions, with callouts to his audience to catch him up; sadly, we had all lost the plot somewhere around the capers (or was it the cornichons?), and the mayonnaise may (or may not) have suffered from the lack of a splash of vinegar when Tony’s connection to Jason (temporarily!) went down at a crucial moment.

But the whole event did give us opportunity to note some of the differences between the two kitchens. Tony’s pans are not pristine, or necessarily worth a mention for their branding, and his hob, as others pointed out to him, is not what he would recommend to others (“where’s your Bora Tony?” came through loud and clear in the comments!) or, indeed, anything like Jason’s super-sized, professional induction ‘hotspot’, priced like a sports car, so we are told, and designed for use primarily in high end hotels. But Tony is cooking in a kitchen that has not been designed by or for him, and has no ambition, in any case, to design kitchens only at the highest end of the market (‘good design should be available to everyone’ is his mantra) – he is simply demonstrating, in real time and with great honesty, how a well-designed kitchen would make his everyday life better.

Jason’s kitchen is, I think we can all agree, well beyond the aspirations of most ordinary domestic cooks and, in some areas, beyond my actual comprehension – that glass fronted ‘pantry’(?) cupboard, seen just out of (full) shot behind you Jason – and filled with, from what I can see, a combination of some good-looking cooking oils, glassware and Aptamil – is intriguing me – and I am itching for you to explain all the thinking and the gizmos and the gadgetry on view.

The thing that we love most about your kitchen though Jason, is the kids wandering in and out of shot as and when they need something, without worrying in the least about your new hobby of talking to strangers they can’t see – it is the sense of ‘family’ that is palpable at the heart of your home that is touching our hearts most (including the recipes demonstrated that are not of your making but mean a lot to you and yours – your wife’s adorable Adobo a case in point). Your kitchen may have some very high spec in its profiles, but there is a very relatable domesticity that is an essential part of how it seems to operate – even as you may struggle to keep professional dignity in it when dressed in white shorts instead of chefs whites (but take heart, we have noticed a general lack of reverence to the comments that a pair of shorts seems to inspire).

Things I loved in Tony and Hayley’s kitchen: the Gluggle jug, sitting on the windowsill, between the teapot and the cookbooks (above the toaster), and just next to the ultimate ‘kitschen chic’ salt and pepper shakers (beware, nothing is beyond notice when a panorama is offered!). The kombucha scoby is undoubtedly impressive Tony, but the whole fermentation thing is hard to wrap your head around as an aesthetically pleasing element in the kitchen for those who’ve not yet taken that plunge! 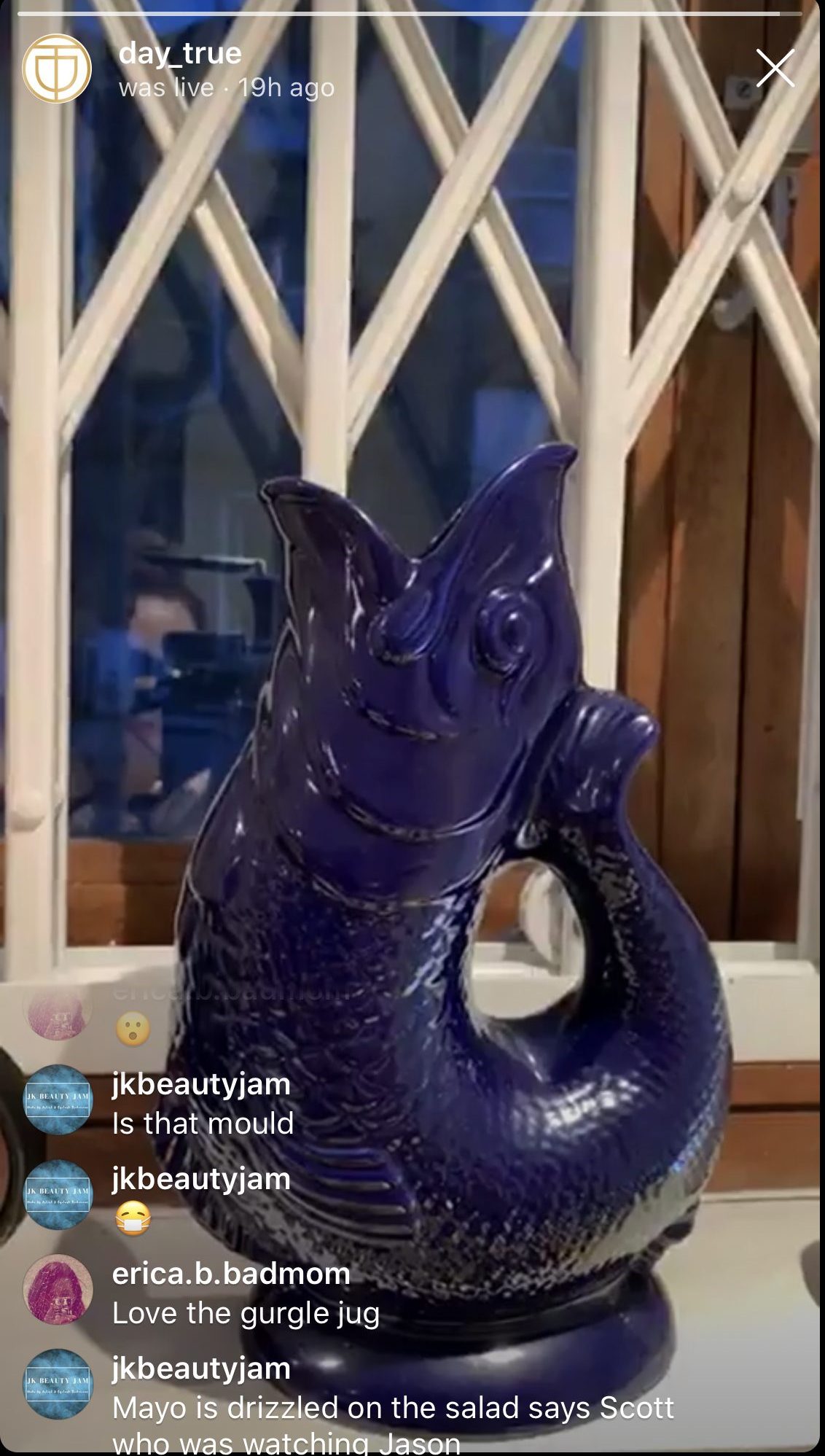 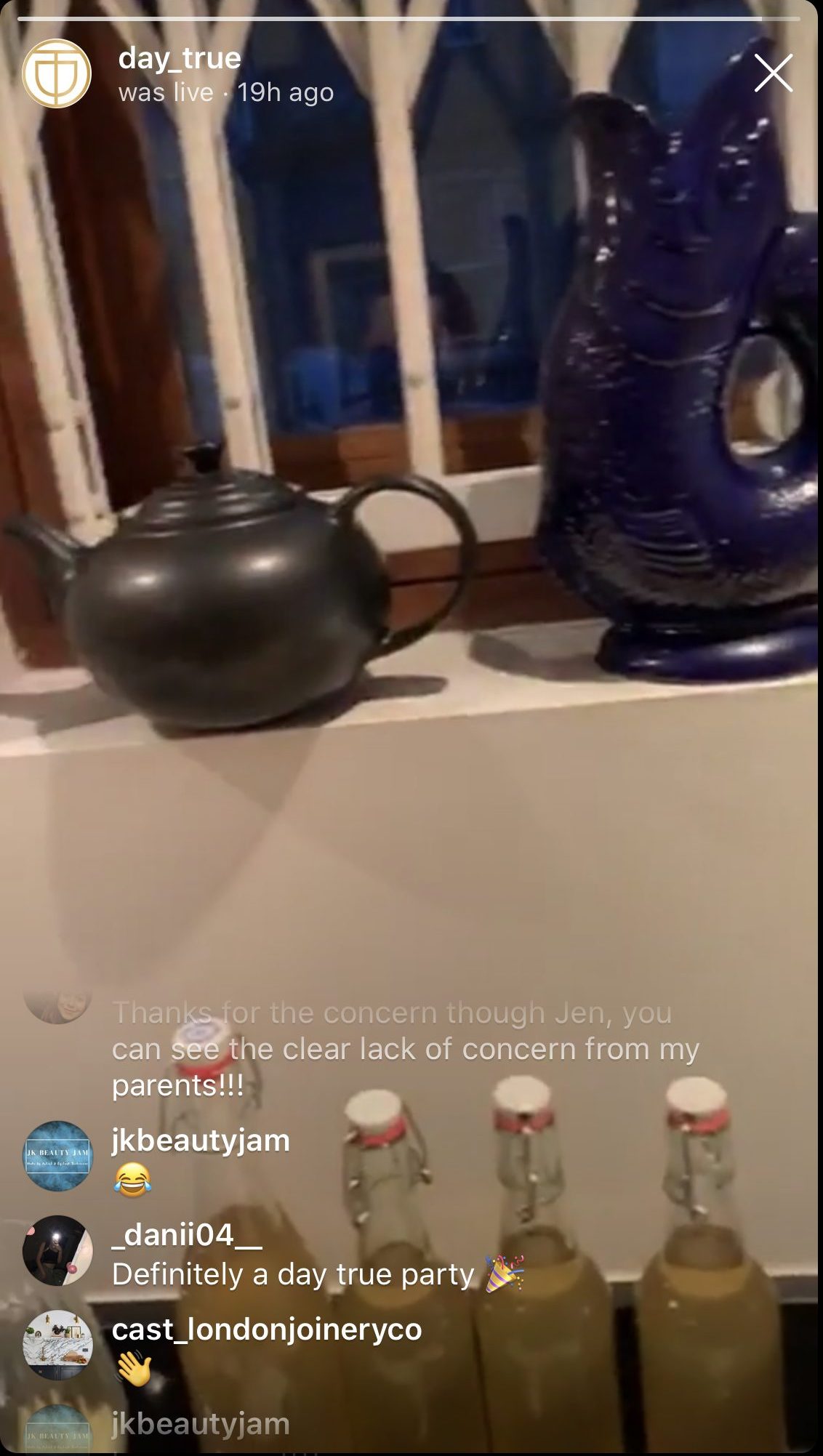 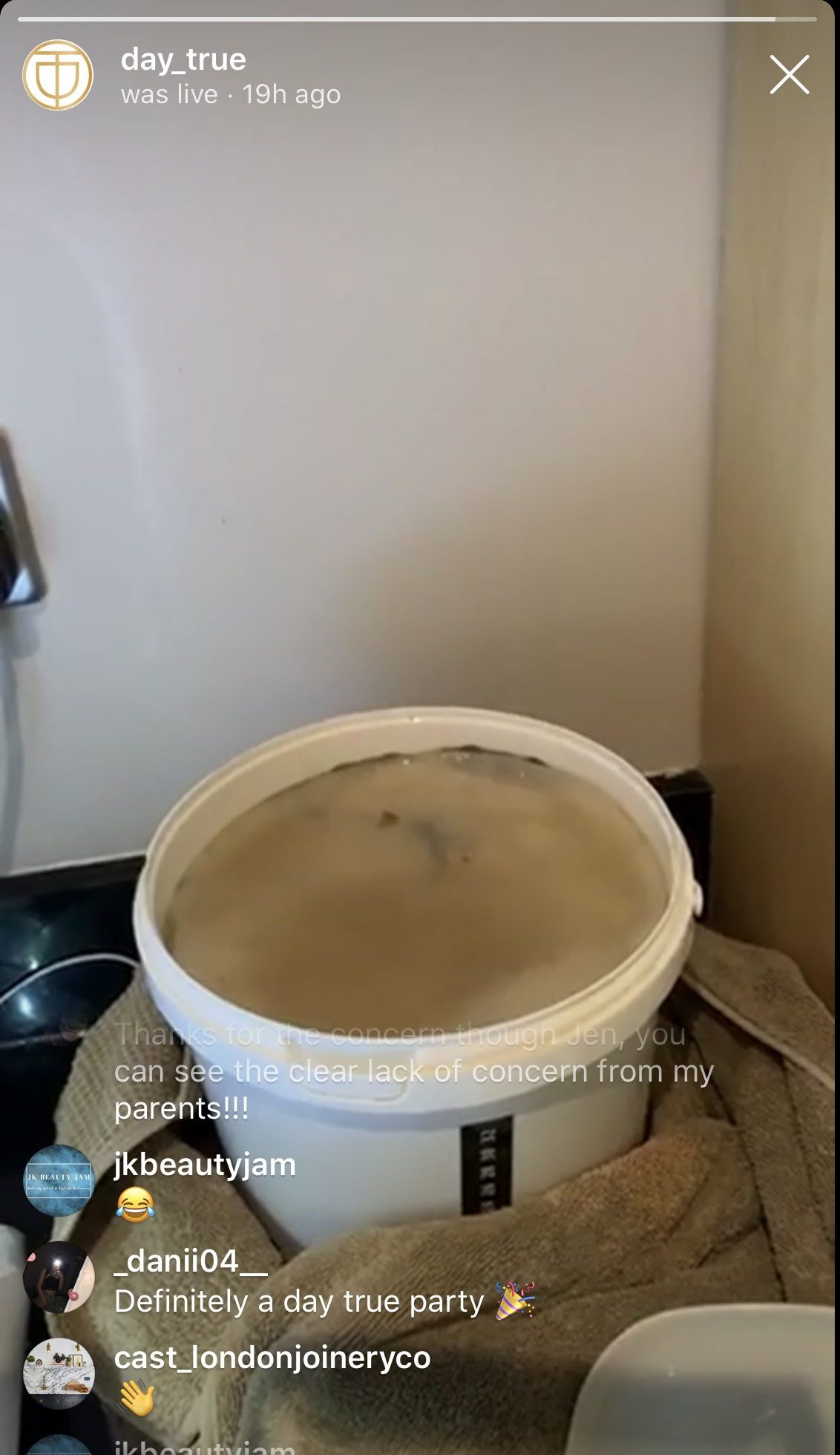 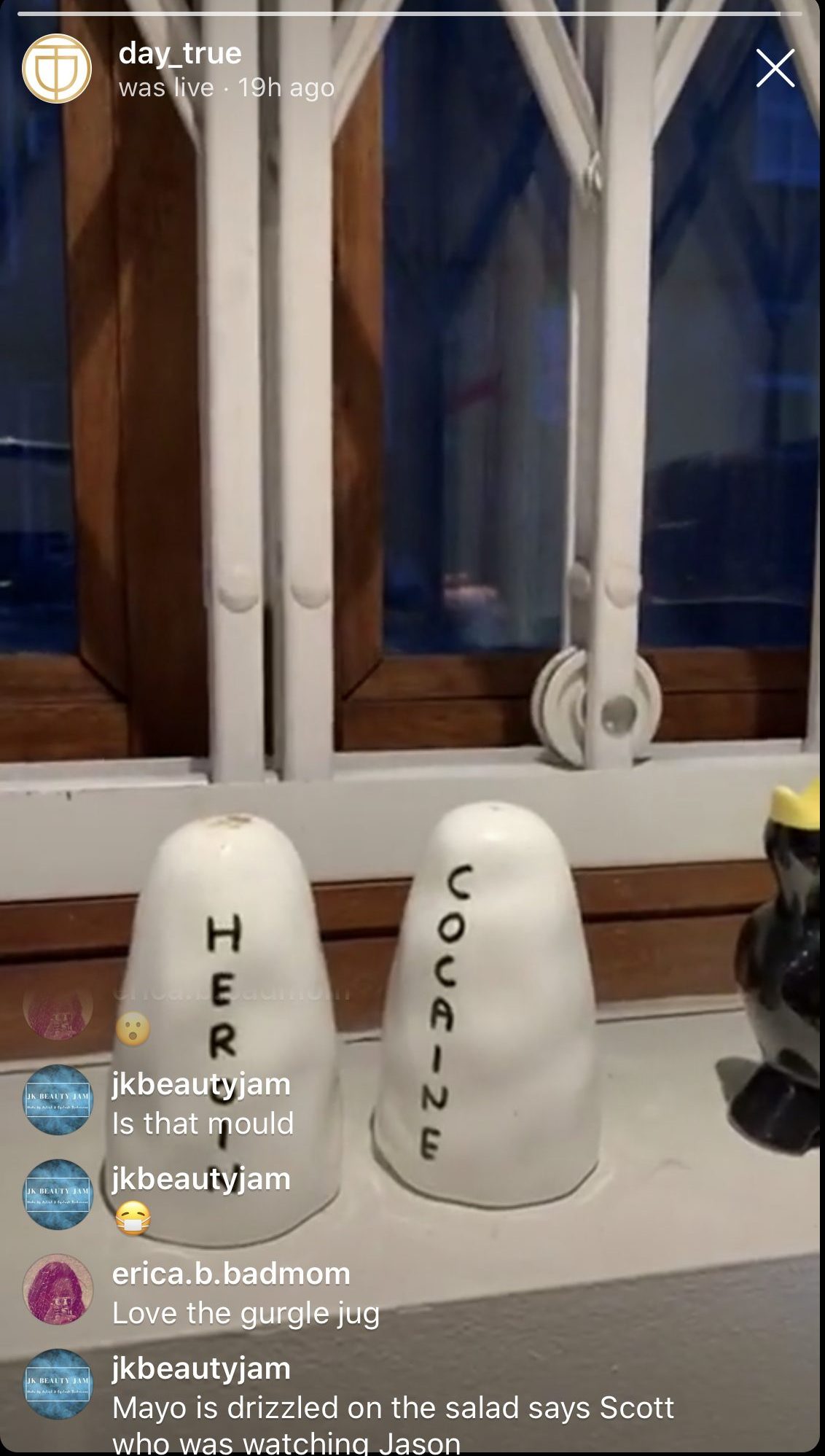 Overall, the cook-a-long was a triumph – the end result looked great, and I enjoyed joining you both for the process (just a shame, in the circumstances, that we all hadn’t cooked along too so we could enjoy the same at home – maybe next time?) 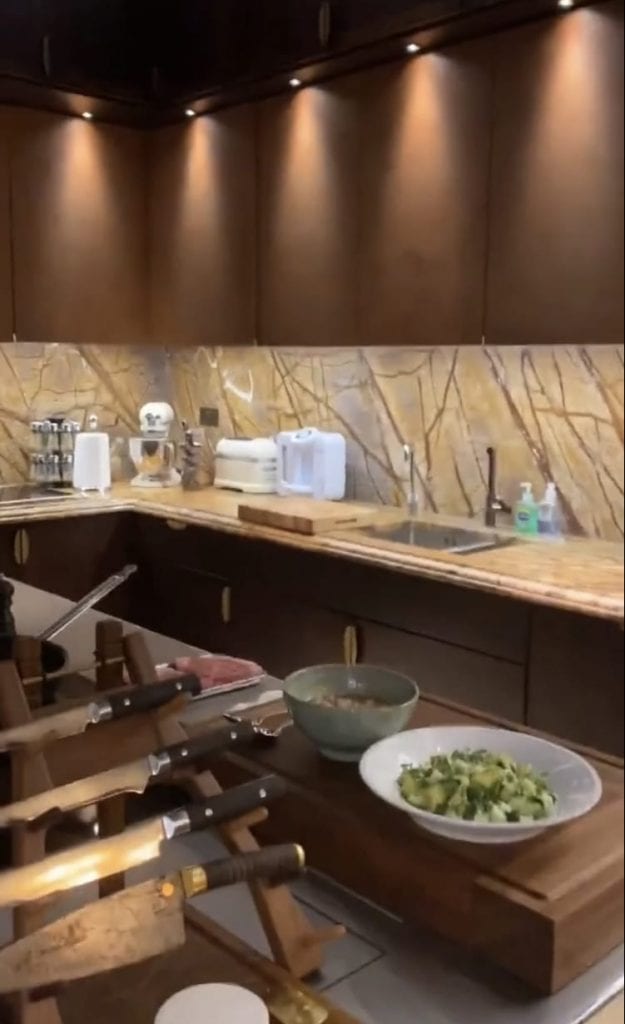 ‘Bravo!’ Jason, for bringing us all together – which is what feels most important just now as we enjoy making some new ‘social isolationships’. Learning some cooking skills from a chef of your calibre is a bonus extra – a cherry on top of this beautiful, complex, and multi-layered confection that you are bringing, livestream, into our homes.

Quote of the day from Tony:

“Jason’s a bit more prepared than me, because he knows what he’s doing.” 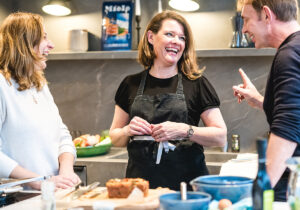 Day True are available for design consultations and advice, please feel free to get in touch on 0207 788 9229  or email on hello@daytrue.com and please follow us on the usual social media channels, we would love to hear from you. 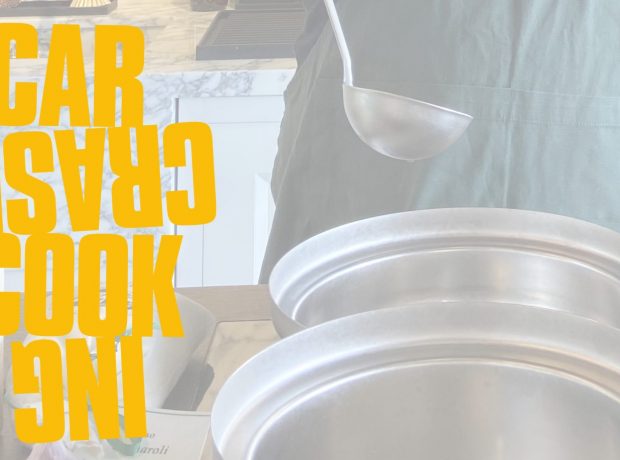 Car Crash with a Chance of Meatballs

or: Searching for Stanley (Part 2) Let’s tell it like it is: Tony was hard to pin down for a time,... 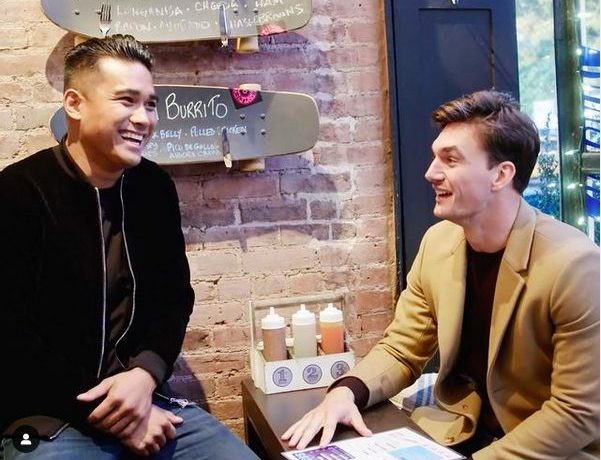 The pandemic lockdown experience gifted some of us rare opportunity to develop a few lockdown crushes on a fair few... 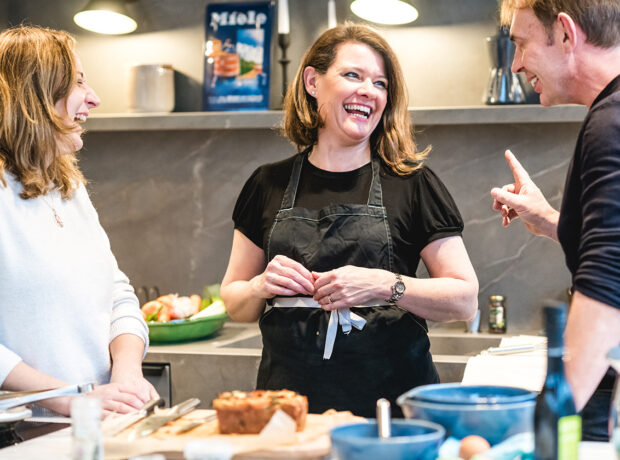 How can we give you a better life?

How? you may well ask! Our aim at Day True is to design you a kitchen that takes into account...